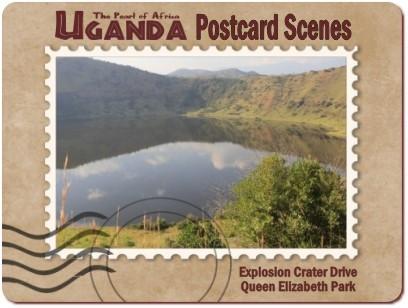 The Scenic Explosion Crater Drive is best done during the early morning hours or the late afternoon. These are the times that are best for picture taking when the lighting conditions are just right, resulting in great scenic photos.

The Katwe Explosion Crater Drive is on a ridge that is the highest point in the Park at 1,350 meters above sea level. From this vantage point before you are the Western Rift Escarpment, Lake Edward and Lake George with the natural Kazinga Channel connecting the two lakes. Overshadowing it all are the ever-present Rwenzori Mountains of the Moon. 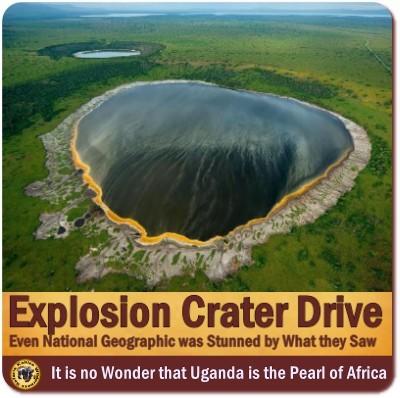 The Katwe Explosion Crater Drive is 27 kilometers is one of the most scenic areas in Uganda and well worth the drive.  There will be many photo opportunities of stunning Craters and Crater Lakes, you will not see the wildlife that you would on the savannah plains below, but you will see your share of Elephants and Buffaloes. Some say it takes you two hours plus to make this drive, that is cutting it short since there are too many photo opportunities for you along the way. Scenes that even caught the eye of National Geographic, and they featured scenes from here.

On this, one of Uganda’s most scenic drives, you will view several dozen Explosion Craters, some of them filled with grass, forest, freshwater or saltwater. During the dry season, large elephant herds wander up to this higher point of Queen Elizabeth National Park.  The Explosion Crater Drive is not on most itineraries of visitors on Safari in Uganda. Still, it is something that you want to fit in during your visit to the Park. You will certainly not regret it. 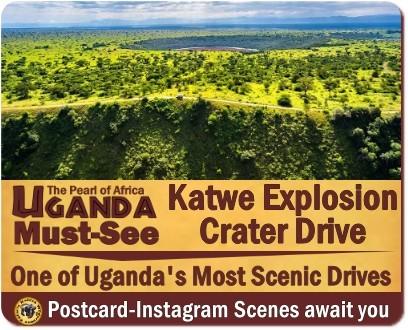 Along this drive, you will be overlooking a portion of the Western Rift, and the vastness of it is most surprising and not something to be missed, and that includes splendid views of Lake George, Lake Edward, and the Kazinga Channel connecting them.

Take some time when the Rwenzori Mountains of the Moon come into full view and take in the breathtaking beauty of the tallest Mountain range in Africa, taller than Europe’s Alps. 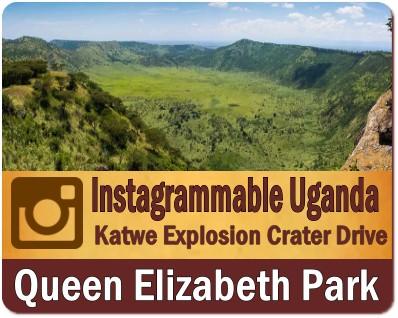 One of the highlights will be stopping to view Lake Kitagata. A salty hot spring feeds the lake and little attraction to wildlife. It has been featured in worldwide nature publications as has been the Kyemengo Crater, which has no lake at its bottom. It appears like a vast grassy Amphitheatre – just a stunning view.

If you like to include the Katwe Explosion Crater Drive in your safari Itinerary, please let us know