Ernest Hemingway – how not to visit Murchison Falls Park

Ernest Hemingway Crashes in Airplane at Murchison Falls in Uganda and is considered Dead by the World. 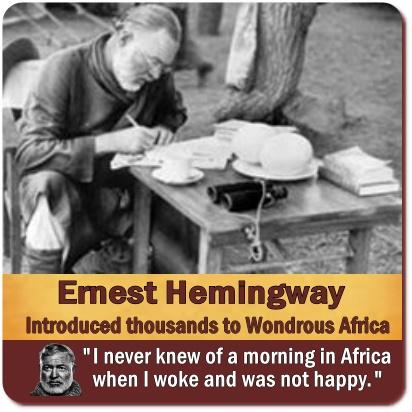 Ernest Hemingway not only crashed once but crashed for a second time while being evacuated to Nairobi. Talk about bad luck on a safari. That is precisely what Ernest Hemingway encountered on what was supposed to a beautiful experience. Two events that would profoundly affect him for the rest of his life.

Ernest Hemingway’s love for Africa was well known. His first three-month African safari in 1933 inspired Hemingway to write “Green Hills of Africa,” “the short happy life of Francis Macomber,” and “The Snows of Kilimanjaro.”

His love for Africa is best described in his own words, “All I wanted to do was get back to Africa. We had not left it yet, but when I would wake in the night, I would lie, listening, homesick for it already.”

Hemingway was in love with Africa. The Safari bug had bitten him. Something most African Travelers come down with. He had returned to Africa for another Safari. Tragically this one was cut short as his Cessna-180 crash-landed at Murchison Falls.

While being rescued by another plane, it too crashed upon take-off resulting in significant injuries to Hemingway. He never recovered.

Murchison Falls Park is today’s Uganda’s most visited park. Still, few of those that visit the falls today know the story of what happened to what many consider the best American Author of the 20th Century. 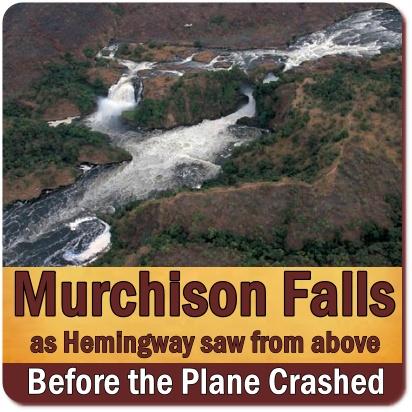 On January 23, 1954, it looked like another wonderful day in Africa. Ernest Hemingway and his wife Mary Welsh Hemingway boarded their chartered Cessna-180 at Wilson Airport in Nairobi, Kenya. Roy Marsh, a seasoned African Pilot, was to take them on a grand fly-over Safari to Uganda. The trip was to be as a late Christmas present for Hemingway’s wife, Mary.

On their flight, they viewed some of Africa’s scenic wonders from above. The Great Rift Valley, Lake Victoria, Africa’s largest fresh-water lake, and Lake Albert. Seeing Murchison Falls, the most world’s most powerful waterfall, was what they looked forward to seeing from above.

The pilot intended to fly as low as possible over the falls. While doing it, the plane’s rear snagged the telephone wire causing the plane to crash in a brushy area near the falls. The aircraft was not severely damaged, but there were not going to take off from where they were.

The one good thing was that they were alive. They did sustain non-life-threatening injuries and needed medical and were bruised and battered but alive.

They now had the dubious honor of being the first and only drop-in tourists at Murchison Falls Park. Their day had turned out different 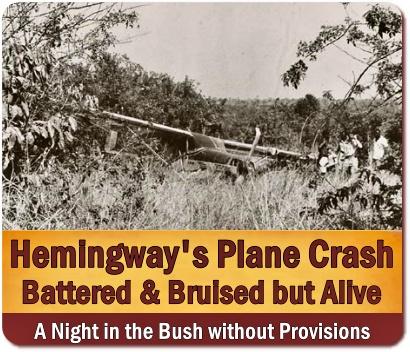 from what was their intention. A day, like no other, the sightseeing trip had become an unplanned Wilderness experience.

Surrounded by elephants, buffaloes, lions, leopards, hippos, crocodiles, and other animals, if that was not on the itinerary.

The crash site was not an epic scene from “Out of Africa.” It was more like an episode from the “Survivor” without the backup support. Roy Marsh made some Mayday calls with the functioning radio on the plane, but there was no response.

They did not carry food, water on other provisions on board the plane. All they had was a few Carlsberg Beers, a bottle of Scotch, some apples, and a few biscuits. Not the typical fare for a night in the African Bush.

They kept a fire going during the night to keep wild animals at bay.

You can be sure that Tsetse flies haunted them during daylight hours and mosquitoes during the night. 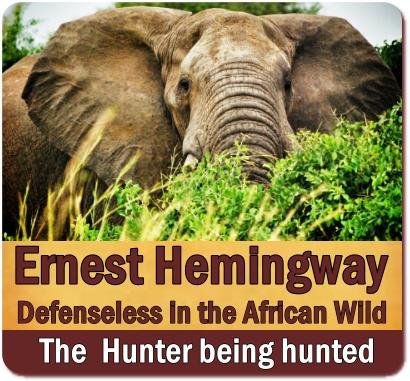 Did they sleep? Most likely, they were kept awake by the rushing waters of the falls and the sounds of roaring lions, trumpeting elephants, and snorting hippos that up from the river to graze at night. Those sounds

Around 5 pm on January 24, Hemingway’s Cessna was reported missing. Some thought that they had landed at one of the nearby airstrips.

The search began in earnest early on January 25, 1954. The British Colonial administration dispatched planes to aid in the search for Hemingway’s party. A British Overseas Airways Corporation pilot diverted his commercial flight and spotted the plane. He commented, “It looked like the chap did a neat job of landing the aircraft.”

The two planes dispatched by the colonial administration confirmed what the commercial airline pilot had reported and led a ground rescue team to the spot.

No survivors were found. The rescuers hoped that they had made it to the river Nile 300 meters from the crash site.

By now, Newspapers worldwide proclaimed that Ernest Hemingway, his wife, and the pilot were dead. Ernest Hemingway was one of the few people to read his own obituaries recovering at the New Stanley Hotel in Nairobi after his ordeal.

The unlikely Rescue by a Sightseeing Boat on the Nile 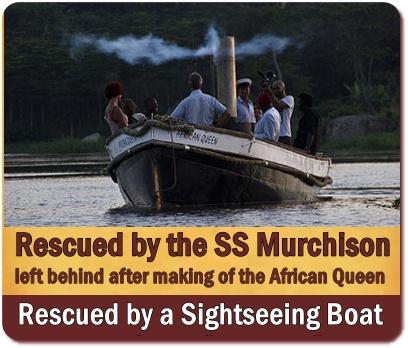 Hemingway, with his wife and pilot, headed for the River Nile in hopes of being rescued. Here is what happened in his own words. “During this safari, we had many times seen mirages when the sun got high, and at the sight of this launch.  I thought first that I must check my eyesight. I called Miss Mary and told her that a launch was coming up the river.”

The was launch was piloted by Edwiges Abreo, a Goan bringing a honeymoon couple on a wildlife boat safari up to the falls. He had been notified by the British Authorities to be on the lookout for Hemingway and his party.

The SS Murchison had been used to make the movie “The African Queen.” Ernest Hemingway later wrote, “It was a wonderful launch, fairly old-fashioned in lines, and we later found that it was the vessel which had been used in the motion picture called The African Queen, which starred two intrepid characters called Katharine Hepburn, who has my great admiration, and Humphrey Bogart, whom I have never yet seen in real life,” 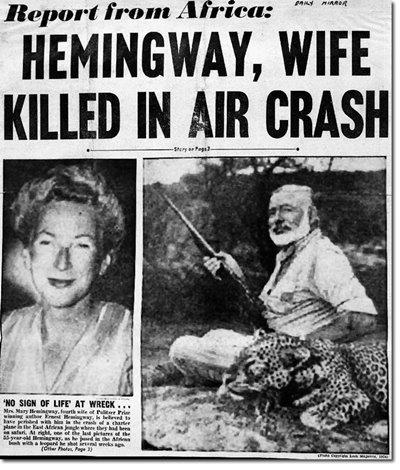 Captain Abreo’s charged Hemingway the required one hundred Shillings per person before taking them downriver to Butiaba along Lake Albert into which the Nile flows. Hemingway, in true fashion, enjoyed the wildlife boat ride as tourists do today along with a few Tusker Beers.

At Butiaba, one of the planes used in the search waited for him to evacuate the three to Nairobi for Medical Treatment. It was, however, not Hemingway’s day. On takeoff, the aircraft hit an anthill and thornbush at the end of the runway, and they crashed for the second time.

Ernest Hemingway used his body to force open the plane, adding to the severe injuries he incurred in the crash. He was the first out of the plane. His wife and crew followed.  After their exit, the plane caught fire and burned.

The second crash left Hemingway with a concussion, scalp wound, double-vision, intermittent hearing in his left ear, a crushed vertebra, ruptured liver, spleen, kidney, and burns. On top of that, they lost their passports, “thirty rolls of exposed film, three pairs of Ernest’s bifocals, all their money, and their $15,000 letter of credit when the plane caught on fire and exploded. 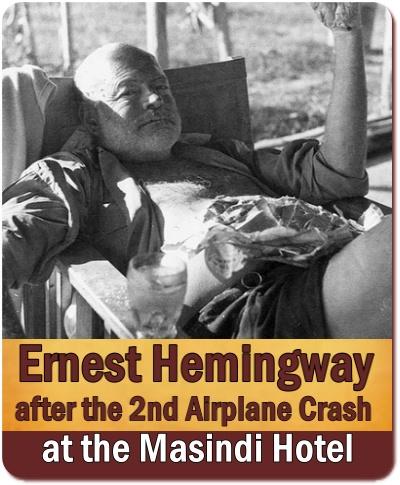 The party then traveled to Masindi by car, where they stayed at the oldest Hotel in Uganda, the Masindi Hotel. Three years earlier, Katharine Hepburn, Humphrey Bogart, Lauren Bacall, and John Huston had stayed there to make “The African Queen.”

It has been rumored that evening the evening of the second crash, the gin and scotch stock at the Masindi Hotel was seriously depleted!

The next day Hemingway and the party traveled to Entebbe Airport by road. A long journey in those days. Upon arrival, he was greeted by journalists worldwide who had come to cover the crash. Though injured and in pain, he took time out to speak and even joke with the reporters.

In Nairobi, he spent time recovering at the New Stanley Hotel, where he read his obituary in some of the International Newspapers.

Ernest Heming. who wrote, “I never knew of a morning in Africa when I awoke and was not happy.”  One can be sure that he was not happy stranded on the shore of the River Nile in Murchison Falls Park, or for that matter, after his second crash in nearby Butiaba.  It has been said that injuries sustained by Hemingway during his second crash led to severe bouts of depression and his subsequent suicide.

The one bright spot in 1954 was that the Nobel Prize in Literature was awarded to Ernest Miller Hemingway “for his mastery of the art of narrative, most recently demonstrated in The Old Man and the Sea.

Ernest Hemingway Crashes in Airplane at Murchison Falls were the headlines in Uganda. You can easily visit the most powerful without crashing on a safe fly-In or drive-in Safari. Feel free to contact us.