Coffee Born and Grown in Africa – a Taste of Africa

Coffee Born and  Grown in Africa. People around the world greet a new day with a hot cup of steaming java, many of them thinking that coffee comes from South America, some far-away island like Sumatra, Java or other Asian countries, not knowing that Coffee that was Born and Grown in Africa.

Who discovered Coffee as a beverage?  There are various legends and stories, and a common one is the one the Ethiopian Shepherd Kaldi who lived in the 9th Century and here is one version of his story as to how he 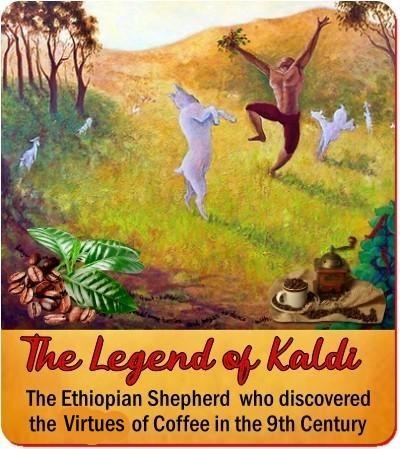 discovered the Virtues of Coffee.

Kaldi was a young Ethiopian shepherd. One day Kaldi’s goats ate red berries off the coffee plant, and he noticed that they started jumping around and were full of Energy.

Kaldi, the shepherd, was eager to know whether it was the berries that gave the energy to be so playful. He
chewed the fruit and found that the taste was quite bitter, but after a while, Kaldi felt alert, energetic.

He picked some of the coffee leaves and the fruit and took them home to his wife who also chewed them, and she felt the same effects that Kaldi had felt.  They were overjoyed and thought that they had discovered a Gift from God.

A few days later, Kaldi took some of the coffee fruit along with the leaves to a nearby Monastery and told the whole story about the dancing goats and the power of the Berries to the monks. The monks did not quite believe him and followed him back to his home and his goats.  The saw for themselves that it was just as Kaldi had told him.  The goats ate the fruit of the Coffee plant and became energetic and playful.

When the monks returned to the monastery, they told the other monks that Kaldi’s story was true.  The monks found the berries bitter and decided to boil them. However, the drink that hey created was equally bitter, and They thought that this must be a Devil\ Drink and not a Gift from God. They threw the remaining Fruit into the Fire, and suddenly there was a great aroma that got their attention.

This how the roasting of Coffee Beans was discovered and then boiling the seed resulting in the first cup of coffee and made them feel energetic.  No longer were they falling asleep at prayer times but alert and focused on God.

Coffee, its virtues spread from here to Mocha in Yemen to around the world.  Since that time people far and wide have to come to enjoy Coffee and energy that it brings and it all began with Kaldi, the Shepherd in Ethiopia.

Coffee Born and Grown in Africa – Both significant varieties of coffee have their origin in Africa. The Arabica bean comes from the highlands of Ethiopia and there has been taken throughout the world. Initially, Arab traders took coffee to Yemen and beyond. It was called the wine nectar of the Islamic world.

The Sufis loved it since it allowed them to gather and worship late at night at their shirk and with the aid of coffee, remaining awake to seek God with a clear mind.  Coffee or Qehva was used by the Sufis to stay up for dhikr (Divine remembrance) sessions, and it is most likely that Jalāl ad-Dīn Muhammad Rūmī took coffee as he wrote some of his poetic sayings.

Mocha in Yemen became the main trading center for coffee and, although Yemen grew coffee in abundance, Ethiopian coffee from Africa remained the best and most sought after and costing more until countries such as Rwanda perfected the little beans. 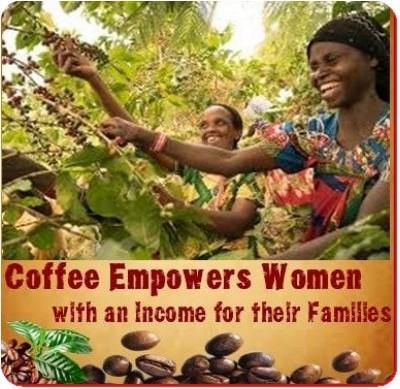 coffee. The Buganda tribe chewed the cherries during the blood brothers ceremonies in times of old.

Robusta coffee is not the same taste quality as Arabica, but it grew in abundance in Uganda (actually – properly roasted, you can get a delicious cup from Robusta); it too was exported to other places in the world such as Vietnam.

Both Robusta and Arabica Beans are today grown in Uganda and Rwanda, Robusta mainly in Central Uganda while Arabica is produced in the foothills of the extinct Volcano – Mount Elgon and in the colder climate of the Rwenzori Mountains and the land of a Thousand Hills, Arabica Coffee Beans are thriving.

Locally, in Uganda, coffee is grown, it is appreciated but not consumed, though that is slowly changing.  Most Ugandans still prefer to have a cup of Chai, Tea instead of a cup of morning Java.  Coffee houses have sprung up all over in Kampala and other major towns in Uganda and Ugandans are beginning to enjoy what the world has for years, a cup of coffee. 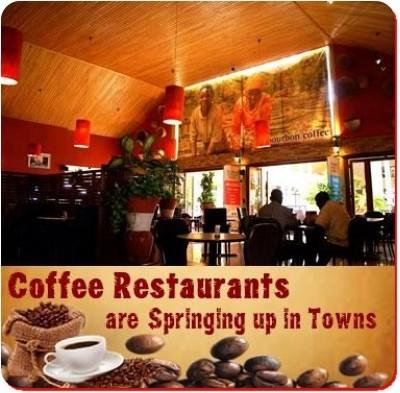 ways to expand their markets, some selling finished products abroad and looking at ways of developing the domestic market with quality roasted coffee.  Robusta is used in instant, Coke and Pepsi and other products that have robusta as an ingredient. Uganda is the largest exporter of beans in Africa.

Coffee Born and  Grown in Africa. That Coffee has changed the world as we know it. The coffee houses of Europe were the hotbeds for social change in England, France, Germany, and Austria.

Various rulers banned coffee houses since they did not want s evident thinking populace to run them out of office. In America, it is documented that the American Revolution was conceived in a coffee house and, even today, coffee houses provide places where one’s business is conducted, where the Internet is accessed, and where people meet for social and romantic interchange.

In Africa – Coffee Restaurants were slow in coming, there was no coffee-culture even in top-growing coffee countries such as Uganda or Rwanda, that has and is changing and you can also get  a decent cup of java on a Safari…enjoy Africa…and A Rwandan restaurant Chain now sells coffee that was Born and Grown in Africa in America. 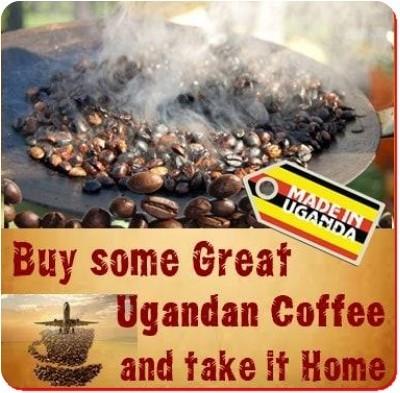 Great Coffee is grown in Uganda:

Uganda is the number 1 exporter of coffee in Africa.  Most of it is the Robusta variety which is higher in caffeine than Arabica and used in lower priced coffees in the west, instant, Cola products and more.

Arabica Coffee of unique nature is grown in the shadows of Mount Elgon in Eastern Uganda and Western Uganda in the Rwenzori Mountains Foothills.

Uganda has a growing coffee culture in towns such as Kampala, Entebbe, Jinja, and even Gulu.

Visitors to Uganda will easily find some world-class java like the Bugisu, Sipi Falls variety of coffee from Eastern Uganda to enjoy.

If you are visiting Uganda, we will encourage you to take home some of its most exceptional coffee.  Coffee is no inexpensive at local supermarkets; the quality, however, is high.

Rwanda produces some of the Best Coffee in the World: 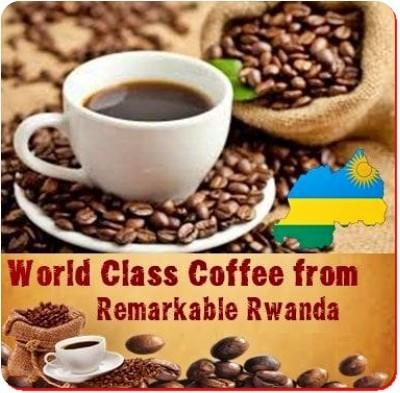 When it comes to Coffee, many would argue that Rwanda’s Bourbon variety Coffee is the best in Africa. Like in many African countries Tea is still the beverage of choice for most Rwandans.

Visitors to Rwanda are pleasantly surprised as to the richness of Taste found in Rwandan Coffee. The Coffee is so good, and the quality is so high that it won the sought after acclaim as the world’s best coffee. Once you taste it, you will agree.

Rwandan Coffee has become so popular that a Rwandan Restaurant Chain has opened up outlets in the USA delighting Americans with what they have to offer from the Land of a Thousand Hills.

Visitors to Rwanda should go on the Crop to Cup Experience along Lake Kivu in Northwestern Rwanda. 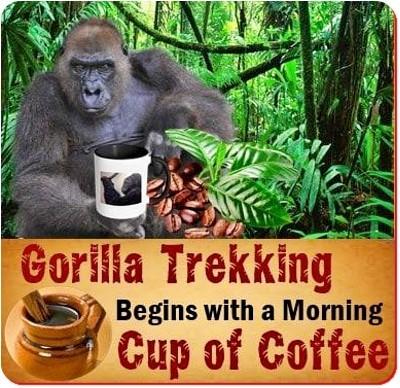 Can you get a good cup of Coffee on a Safari:

Here is some advice for visitors to both Rwanda and Uganda.  Coffee Lovers might be surprised that getting a great cup of coffee in countries where coffee is grown everywhere is not the easiest thing.

Here are practical tips for the Morning Joe Addict that needs that one right cup in the morning while on Safari in Rwanda or Uganda.

Proven ways that will work for you while visiting Africa and Rwanda and Uganda in Particular.

A great cup of Java can be had, but it may take some extra effort. Be sure to read the advice for Coffee Lovers.

Coffee Born and Grown in Africa, but it is not always easy to get that just right cup for you, but we will do our best to do so.

Posted under Culture - Traditions,Food - Drinks on Safari,Kabiza Wilderness Safaris,Rwanda,Travel Advice,Uganda
Comments Off on Coffee Born and Grown in Africa – a Taste of Africa