How to prevent Wasp Attacks while Gorilla Trekking in Uganda

Wasp Encounters on a Gorilla Trek – A Rarity

Steps How to prevent Wasp Attacks Gorilla Trekking in Uganda

Uganda.  Wasp Attacks occur around the world and at times they can have dire consequences as in the case of 65-year-old American Tourist, Gloria Suemiller from Oklahoma who succumbed as she was attacked by a swarm of Wasps in the Ruhija area of Bwindi Impenetrable Forest May 2018. No other Trekkers in her group were injured.

Thousands come to Trek the Mountain Gorillas without incident, no wasp- attacks, no guerillas, just safe and secure Gorilla Trekking.  When it comes to animal fatalities, bees, hornets, and wasps are some of the deadliest wild animals you’ll ever run into and hopefully you will not will not Gorilla Trekking in Uganda.

How to prevent Wasp Attacks while Gorilla Trekking in Uganda

How To Avoid Getting Stung:

1.  Use a Deet based Insect Repellent:  While the repellent may not work a 100% with Wasps, it seems to help.  We 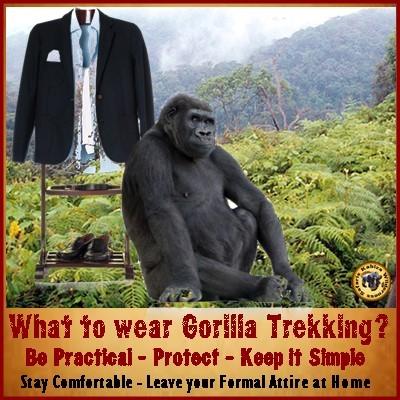 2.  Do not use Perfumes, Colognes, After-Shave Lotions:.You do not want to smell like a Flower.  Heavy Scent like a flower attracts Wasps.  When you go Gorilla Trekking, don’t use it.

2.  No brightly colored Flower Print patterned Shirts, blouses or Skirts:  Leave your Tropical Shirts at the Lodge, you are not going to a Luau, but a Gorilla Trek.

3.  If you have long Hair – tie it in a Ponytail:  This helps with Wasps not becoming entangled in Your Hari.

4.  Take no Sodas on Trek stick to Bottled Water:  Best not to bring any sugary things on the Gorilla Trek

5.  Wear the Right Clothing for your Gorilla Trek:  Long Trousers, long-sleeved shirt, hat, boots, thick hiking socks, tuck trousers into socks, tough gardening gloves, Hat, especially tight fitting caps are good. Have a light rain jacket with you.  This can be used to cover your face and head should there be a wasp attack. When disturbed, wasps direct their attack against dark colored objects, stick with a neutral color like khaki.

6. Take a Shower the morning of Trek:  Wasps become agitated by the strong odor of sweat. To keep under their

scent-radar, freshen up—preferably with unscented soap and water before your Gorilla Trek.

7.  On the Gorilla Trek: Stay ware-Try to stay away from Wasp nests and hives—they will defend their territory. If you see a lot of wasps about, point it out to the Ranger leading the Trekking Party.

8. Eating your Packed Lunch:  Just make sure your food is not attracting wasps.  You certainly do not want to bite into one.

9.  Look-Out for Wasps on the Trek: Keep a look out for the flight paths of wasps approaching their nests. If possible detour around them, but one or two people moving relatively quickly can usually pass close to a nest entrance without harm.

10:  Stay away from Wasp Nests:  We recommend that you stay well away from wasp nests’ Wasps, pheromones act as an alarm. They are secreted by some of the group when they think they are in danger, like if the nest is disturbed or one of them is killed. The rest of the wasps react to the pheromones by swarming out of the nest and attacking the intruder.

In the case that you are attacked by Wasps:

unless you disturb the nest. One of the things that trigger a mass attack by wasps may be the smell of wasp venom, so the smell of the first wasp stinging you will excite other wasps that will join in on the attack.

Do not swat at the Wasps or flail your arms. Wasps are attracted to movement and crushed bees emit a smell that will attract more Wasps.

If you are being attacked, act immediately. Run quickly through thick vegetation. This should brush most of the wasps off, and a quick sprint of no more than 20 m should see you safe.

As you are running, pull your shirt up over your head to protect your face, but make sure it does not slow your
progress. This will help keep the wasps from targeting the sensitive areas around your head, mouth, and eyes.

If you have been stung more than 15 times, or are feeling ill, or if you have any reason to believe you may be
allergic to wasp stings, seek medical attention immediately. The average person can safely tolerate 10 stings per pound of body weight. This means that  the average adult could withstand more than 1000 stings.

If you are allergic to Bee, Wasp stings, then bring your epinephrine auto-injector with you on your Gorilla Trekking Safari.

Wasp attacks occur around the world, they are not unique to Africa or Bwindi Impenetrable Forest where we now have had one sadly unfortunate fatal Wasp attack.  The Rangers leading your Gorilla Trek are concerned for your safety and wellbeing.  They know the forest and often will know where wasps may be and avoid the area. Medical Care is available in case of a Wasp Attack or any other medical emergency.  Bwindi Community Hospital is one of the best rural hospitals in Uganda where they will be able to treat most conditions.