When is the Best Time of the Year for Gorilla Trekking in Uganda?

Often Asked, “When is the Best Time of the Year for Gorilla trekking in Uganda? 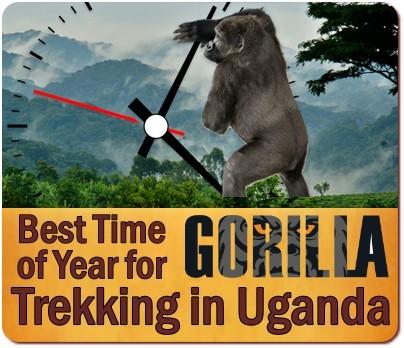 When is The Best Time of the Year for Gorilla Trekking in Uganda? Gorilla Tracking takes place all year long, rain or shine. The best and busiest times of the year are during the Dry and High Seasons in Uganda of July through September and Mid-December through February.

The high or dry seasons come with certain disadvantages such as scarcity of permits, more tourists,  higher, mostly luxury lodging prices. In Uganda, you track gorillas in the Rainforest of Bwindi Impenetrable Forest and on the sides of Virunga Volcanoes in Mgahinga Gorilla Park. Both are located in the Gorilla Highlands of Uganda, where due to the elevation, you have cooler temperatures. Whether dry or rainy season, it can rain at any time in a rainforest, and it does. However, the sun will come out soon after.

For many, the Best Time of the Year is the two Off-Seasons, the Rainy Seasons, when there are fewer people and lower prices, especially for upmarket lodges.

For many, the Best Time of the Year for Gorilla Tracking in Uganda is during the Rainy Season, from April to May and November to Mid-December.  There are fewer Tourists, meaning more permits that are available, and luxury Lodges are often discounted. The dates for the discounts will vary lodge by lodge.

The term Rainy Season is not as dreadful for many as it may sound – the temperatures are milder, the parks are even greener, wildlife often more abundant, and the Gentle Giants of the Forest, the Mountain Gorillas, are used to a bit of rain.

When is the Best Time of the Year to track Gorillas in Uganda?

Gorilla Tracking from January through February 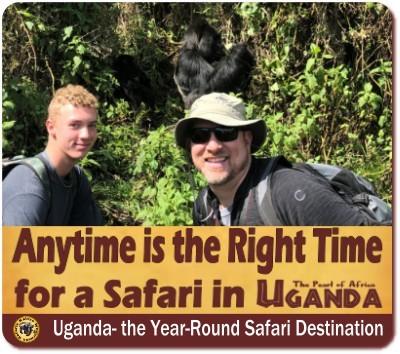 January and February are part of the dry season.  It is one of the best times to track gorillas in Uganda, although rainfall can be expected here during any month.

January and February have become some of the most popular months with Gorilla Trekkers. During some years, there are more gorilla trackers in January or February than during July and August.

Gorilla Tracking from March through May

This is the time referred to as the long rains, one of the country’s two wet seasons. The trails will be muddier as you track gorillas. Still, you will be overwhelmed by the rich and lush foliage, flowers, and Afro-montane plants that you will see trekking in Bwindi Impenetrable Forest or Mgahinga Gorilla Park.

The advantage of fewer tourist, readily available gorilla permits and lower luxury lodging prices will outweigh the benefits of the dry season. Many actually enjoy the rainy seasons. Even Winston Churchill wrote about the rains in his 1908 Book “My African Journey.” Even the Rainy Seasons are not like you might imagine them to be.”

Gorilla tracking from June through August

June through August is the high and dry season and one of the best times to track Gorillas in Uganda.  You might find that it rains here and there at night or during the early morning hours before sunrise with the sun coming out during the morning.

On the negative side, gorilla-permits will be harder to obtain. You must book your safari well in advance to obtain them. The same can be said when it comes to the availability of lodging. Should June and August are your months of choice, then plan your gorilla safari early with us.

Gorilla Tracking from September through October

November is a rainy season month with the so-called short rains arriving. You will have muddy trails, will need a poncho and waterproof boots. However, you will have permits and a choice of lodging at a discount.

Gorilla Tracking during December, including the Holiday Season

You can expect some rainfall during December, but it is a great month for trekking to see mountain gorillas, especially during the latter part of the month.

From Mid-December on, there is an increase in tourists, and once again, gorilla permits become scarce. It is best to plan and book your safari well in advance to ensure both permit and lodging availability. 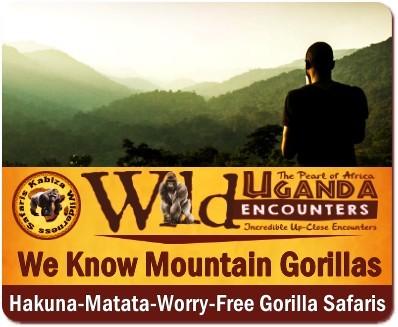 When is the Best Time of the Year to track Gorillas in Uganda?

It is up to you; the choice is for you to make. The best Weather Months are also the busiest months of the year for gorilla tracking. There are more tourists and fewer permits. You must plan well ahead with your gorilla safari dates.

The Shoulder months are gaining in popularity. People like those months and days of transition between Dry and Wet Seasons. The time between High and Low Seasons. They are an excellent choice for those that want nice weather, fewer tourists, and greater permit availability.

We like to point out Climate Change has affected the Weather Patterns in the Country. The Dry and Rainy Seasons are no longer as predictable as they once were. Rainstorms can happen during the dry Seasons.

The Weather for both Bwindi Impenetrable Forest and Mgahinga is unlike what is found in much of Subsaharan Africa. You are not trekking in a steamy jungle.  The temperature during the day rarely exceeds 26 degrees Celsius during the day and drops down to 12 degrees Celsius or lower at night, depending on the elevation.  You are in what is called the Switzerland of Africa. The weather usually is right for Gorilla Trekking and hiking.

Going on Safari during the Rainy Season