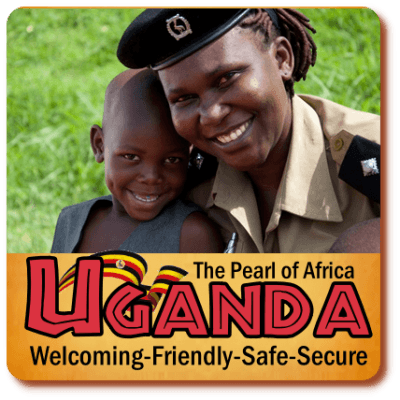 Authority Rangers, the Uganda Tourism Police,  adds another layer of  Protection for Tourists in Wildlife Parks, Recreational Sites, major towns such as Entebbe, Kampala, and Jinja.

The Uganda Tourism Police was created to do one thing, Protect Tourists and Visitors to the Pearl of Africa.  They are there for your safety and well-being.  They even protect Tourist from fraudulent, fake Tour Operators as the arrest of them recently showed.  Uganda is safer for Tourists because of the Tourism Police.

Unfortunately, the Tourism Police were not in the Ishasha Region of Queen Elizbeth Park when Kimberly Sue Endicott on April 2nd,2019 while on a sunset Game Drive was ambushed by unidentified men in uniform who kidnapped her and the driver of the Safari Vehicle.

This was an isolated occurrence and the first of its kind in this country – the kidnapping of a Tourist.  Extra security measures have been put into place, some of those extra measures will become normal ones.

Uganda Tourism Police Means Safer Safaris. The Tourism Police have added an extra layer of Protection for Tourists. They are there to enhance the security in National Parks, Wildlife Reserves, Hotels, and other tourists destinations.  They work closely with the Ugandan Tourism industry in preventing crime against both domestic and international tourist.  Though there have been no crimes against tourists of major proportion with the exception of the recent Kidnapping, this is another step by the Ministry of Tourism and the Ugandan government to make sure that you are safe and secure on your Safari Holiday in the Pearl of Africa.

Uganda remains one of the safest countries for visitors to Africa and this measure of the added Tourist Police simply adds another factor in keeping tourists in Uganda safe and secure and making the Pearl of Africa a safer country than it already is.

E-TurboNews: “The tragic kidnapping that recently occurred in Uganda should not be seen as indicative of overall safety in Uganda. “Very much to the contrary, Uganda has been known over the decades to be a safe and secure destination. Unfortunately, there are bad people in every part of the world and travel implies risk.

escort – all this to make your Safaris, your gorilla and chimpanzee tracking safe and secure.

The Uganda Tourism Police Force is one that is primarily a preventive force with the aim of preventing crimes before they happen through their presence.

Uganda Tourism Police Means Safer Safaris –The Ministry of Tourism and the Government of Uganda are concerned about the safety, security, and well-being of Visitors and Tourists coming to visit the Pearl of Africa.  Though the country is stable and is one of the safest countries to visit in Africa, no effort is being spared to make your safari in Uganda, your visit to the pearl of Africa even safer through the addition of the Tourism Police…

The Tourism Police also police and arrests Tour Operators who have been conning their clients and not deliver the services promised.

Posted under Safety - Security,Uganda
Comments Off on Uganda Tourism Police Means Safer Safaris in the Pearl of Africa