Visiting the Karamojong People –  Warriors – Nomads – Pastoralists in a Manyatta

Meet the Nomad Warriors, the  Karamojong (Karimojong) are a proud people living in their traditional ways as semi-nomadic herders in the remote Karamoja region of Uganda which borders South Sudan and Kenya. 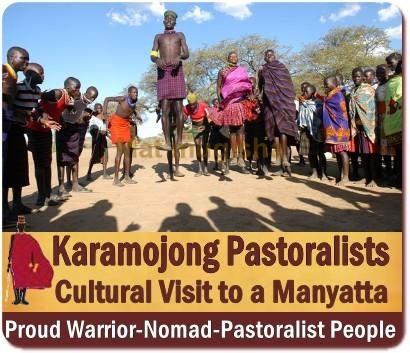 The Karamojong are proud of their traditional lifestyle, which, even in Uganda, is often misunderstood.

Other Ugandans see the Karamojong as behind the times. The city-dwellers see the Karamojong as uneducated and primitive. There is substantial prejudice against them. That is based on the Karamojong resisting formal education and modernization. They have clung to their traditional beliefs and rejected outside religions such as Christianity. To them, Akuj is still the God of their faith.

The Karamojong Warriors live and die for their cattle. They believed that their God, Akuj had given them all the cows in their known world around them, which led them to think that the herds of neighboring tribes were theirs also.  The problem was that the neighboring tribes held the same beliefs, resulting in ongoing cattle raids in each other’s territories.  As the supply of weapons increased, especially at the end of Idi Amin’s time, the violence escalated, and many lives were lost by various ethnic groups, including the people of the Karamoja region of Uganda. (These cattle raids have now been reduced through disarmament and peace agreements with other ethnic groups.)

To the Karamojong People,  cattle are royalty, and the number of cattle one owns shows the value and recognition of a man.

Everything is done to take care of the cows, such as finding new pastures and new watering spots in this very arid 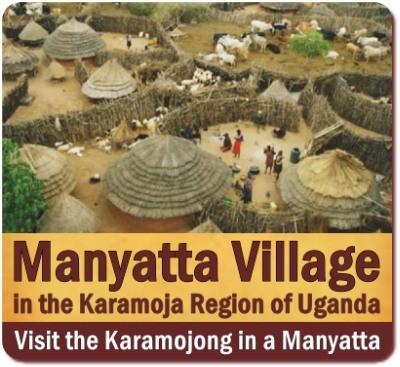 region of Uganda. The men and boys will move the cattle to greener pastures, higher up in the hills. Their water can be found in makeshift camps called Kraals. The women stay in the Manyattas, which is the permanent homestead. It is there where the women and girls grow some crops. Here they grind their sorghum and make traditional beer. They also tend to the smaller children.

Life is communal on with the men taking several wives, as long as they have cattle pay the dowry price.  Families, especially extended ones, live together or near each other, sharing everyday tasks by helping each other.

Today there are about 370,000 Karamojong people in Uganda.  As a Nilotic group, which means “of the Nile,” they speak Akaramojong, and the word Karamojong, or Ngkaramojong, translates to “the tired old men who stayed behind.”  The latter is of their migration from Ethiopia, and they settled in Uganda when they ran out of steam.

Visiting The Karamojong in their Village – Manyatta in the Karamoja Region:

If you are on Safari with us to Kidepo Valley Park. A visit to a Karamojong Manyatta (Village) can be included in your itinerary.

A Manyatta visit will be culturally enlightening and refreshing since it is not a Tourist staged event. Still, you will see how the Karamojong live in houses where you have to bend down to enter through a small entrance. You can observe community life, and one of the highlights is, of course, the traditional dancing, which is accompanied by high jumping, all performed in honor of your visit. Visiting the Karamojong people will be one of the highlights of your time in Uganda.

Tips and Advice for a Manyatta Visit:

You will find that “Visiting the Karamojong People in a Manyatta” will be one of the highlights of your Safari to one of Africa’s best Wildlife Parks – Kidepo Valley Park. You can also include a daylong visit to the nearby Ik People who live high in the Morungole Mountains.

The Karamajong People are unique, resisting the pressures of the outside world to conform, to turn away from their traditional cultural ways, as other people groups have done throughout Africa.

Posted under Culture - Traditions,Karamojong Tribe,Kidepo Valley National Park,Things to do and See,Uganda and tagged with Things to Do - See
Comments Off on Visiting the Karamojong People in Karamoja-Northeastern Uganda