Visit the Source of the Nile in Jinja – Uganda

The Source of the Nile is still in Jinja Uganda 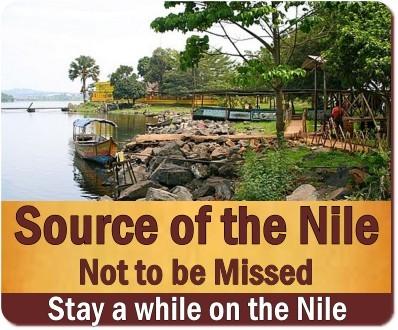 Visit the Source of the Nile in Jinja, where the longest river in the World has its beginning. A visit to the ancient and historic Blue River Nile at its source in Jinja Uganda is not to be missed. The Nile is the Longest  River in the World.  The White Nile begins its 6,000-kilometer journey to the Mediterranean Sea at Jinja, the source of this mighty river. The White Nile joins the Blue Nile in Khartoum, Sudan.

Throughout ancient history, the source of the Nile was a mystery waiting to be discovered.  It was not until the English Explorer John Hanning Speke was the first Westerner to find the source of the River on August 3rd, 1858. John Hanning Speke stood at the place where Lake Victoria became the river at what then Rippon Falls in what is now the town of Jinja.  Rippon Falls is now covered by the Owen Hydroelectrical dam that was built by the British when Uganda was still a British Protectorate.

He was the first European Explorer to reach the Source of the Falls. His conclusions were doubted by many 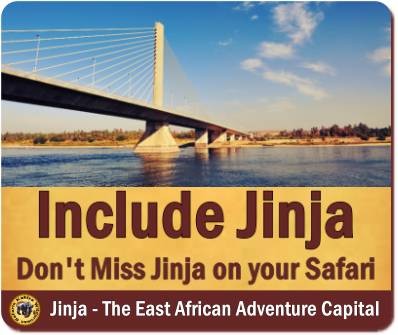 only to be confirmed later by Sir Samuel Baker on one of his expeditions to Uganda.

Uganda is Home to the Source of the Nile. That ancient and historic river that flows through Uganda north to South. The Nile also flows through  Murchison Falls National Park, where it tumbles down the Western Rift Escarpment as the most powerful waterfall in the WorldWorld and continuing through Lake Albert onward to Sudan and the Mediterranean Sea.

In October of 2018, a new Suspension Bridge over the Nile made it is easier to get to Jinja for a visit to the Source of Nile Park. The Bridge has also eased getting to the adventure and leisure Activities for Tourists that like to do some of the Best White Water Rafting in Africa.

Spend a While on the Nile at its Source: 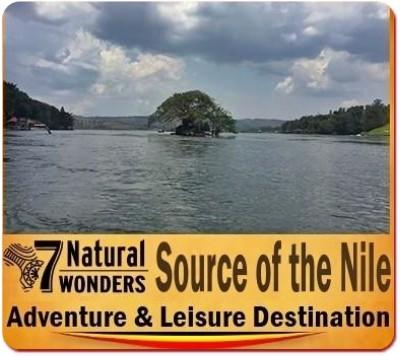 In Jinja where the Source of the Nile is located:

Jinja, which is located on both Lake Victoria and the River Nile – is also the Keeper of the Source of the River and the gateway to both Adrenaline pumping adventures and leisure where you can relax and chill out.

Jinja is best known for adventure, such as White Water Rafting, Kayaking, shooting through white water in powerful jet boats, Bungee Diving including at night, sailing, fishing for the mighty Nile Perch Fish.  On the more leisurely side, visit the Original  Park, take a motorboat cruise on the river, Sunset Cruise with drinks and snacks.  Or simply sit at your hotel or lodge overlooking the river and read a book.

A visit to the Source of the Nile is a must for visitors to Uganda. We can include in your Safari with us, it is best to make it an overnight visit and spend a while on the Nile in Jinja, and the following day does one or two of the things that one can do and see in Jinja on the Nile. Not all adventures are adrenaline producing, some can be rather relaxing,  such as fishing, birding, a family float trip, a hike along the river or a village Visit, the Gentle side of Jinja. 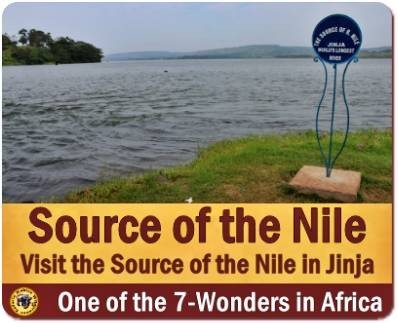 The source of the Nile park is a most pleasant place and has tremendous potential, the boat ride to the exact spot where Lake Victoria and the Nile merge provides some great picture opportunities for you.

A visit to the Source of the Nile is enhanced with lunch along the river in a restaurant that overlooks the river. Add to that a visit to the town of Jinja with its Colonial and Indian architecture.along with a visit to Itanda Falls, where you can witness the power of the ancient river.

A sunset cruise from quiet to a Booze Cruise can be taken before and until after Sunset.  Sunset is around 6:40 pm, and darkness sets in after 7 pm.

The Source of the River Nile is a major tourist attraction. It has been so for years. Even India is involved in promoting and upgrading the source as an International Tourist Destination. The Reason, a Stature of Mahatma Gandhi, is found here. His ashes were strewn into the river, and many Indians and non-Indians come here and take a moment out of their visit to reflect on his life and ways.

The Source of the Nile Discovered by – John Hanning Speke: 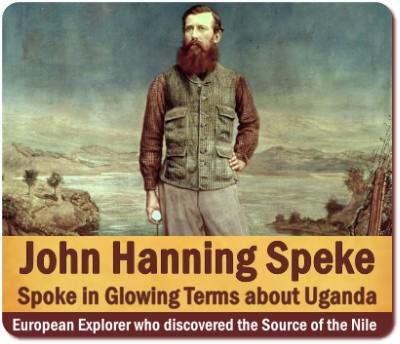 Africans lived here along the River Nile, its source at Lake Victoria for centuries, but the first Westerner to reach here was the British Discoverer John Hanning Speke.

The Source of the River had long been sought by others such as the Missionary Explorer David Livingston. After John Hanning Speke discovered the source of the Nile, his former exploration partner, Richard Francis Burton, publicly rejected the findings in favor of his idea that Lake Tanganyika in Tanzania was the real source of the Nile River.

There was a public battle between the two men, and people were drawn to both opposing views.  This battle was fought out in the Press.  To settle things on the side of Truth, the Royal Geographic Society sent John Hanning Speke back to Uganda in an attempt to resolve the dispute.

In the eyes of most John Hanning Speke was celebrated as the one to discover the Nile, something that Richard Francis Burton would never accept. The Royal Geographic Society called a public debate, a debate that never took place since Speke suffered a fatal shot to the head. 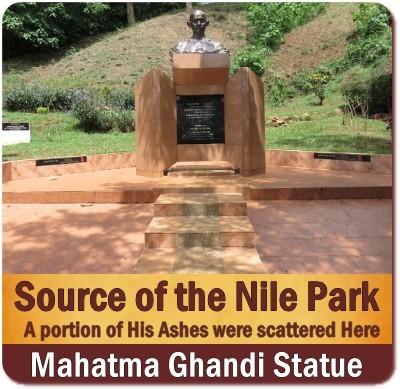 The rift between the two men, however, would never heal. Speke, now a hero of the Age of Explorers, published two books that made him look a braggart. Burton, meanwhile, refused to accept defeat. A public debate between the two men was scheduled to take place at the British Association to settle matters once and for all, but on the day before the debate, Speke suffered an accidental, fatal rifle shot to the head while hunting. The widespread assumption became that Speke’s death was a well-disguised suicide, motivated by a fear of facing Burton in public.

The source of all this tumult is marked by a modest sign that reads “The Source of R. Nile – Jinja – World’s Longest River” at Ripon Falls, a series of cataracts that are partially submerged due to dams constructed upriver. A small cafe and shops, as well as boat dock with tours for hire, are loc

In the 21st Century, – African Tourism is a significant source of income.  Everyone wants bragging rights for one thing or another, and that includes the Nile Source.

Both Burundi and Rwanda are marketing themselves as the country where the River Nile originates. That does not change the reality that Uganda is home the source of the Nile, not a tributary, not theory, the Nile that flows out of Lake Victoria through Uganda is a result of the entire watershed basin, and that is way beyond Rwanda and Burundi but includes Tanzania and Kenya.  Who knows, next Rwanda and Burundi will demand rights to Lake Victoria.

Black Lives Matter and John Hanning Speke:  John Hanning Speke was a man of his time. The Slave Trade still existed, and England had greatly profited from it. John Hanning, like most explorers, saw Africans as Savages as lesser than white. In Uganda, unlike in the West, no statues or memorials have been removed at present. A petition and proposal are before the Ugandan Parliament for name changes of Streets and places that have the names of Colonialists on them.