Teddy Roosevelt on Safari – Guns Ablazing shooting everything that moved

Teddy Roosevelt on safari in East Africa, including Uganda, smacks of the reality that Big Bwana Tumbo (Mister Stomach) did not go to Africa to preserve its Wildlife.  In 1909 President Teddy 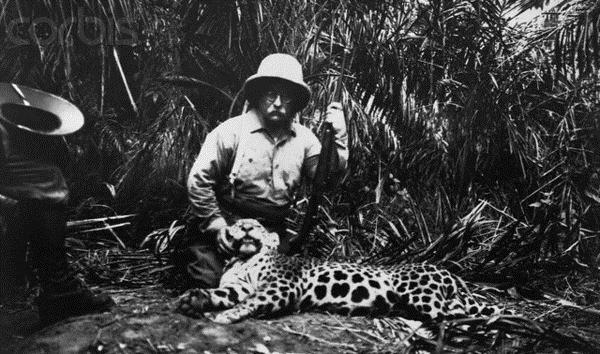 Roosevelt turned a safari in East Africa into a gruesome massacre. Roosevelt and his party killed or trapped  11,397 animals, from insects to elephants.

Teddy Roosevelt A Wildlife Massacre under the Guise of Scientific Research, let us be realistic, who needs stuffed Animals at the Smithsonian Institute?  African Wildlife then and now belong to the African Wild.

Though seen as America’s first Conservationist President, in Africa, the Patron Saint of Smith and Wesson remains Big Bwana Tumbo, Mister Stomach for African Wildlife. If anything, he remains the model today for Trophy Hunters who flock to Africa each year to kill African Game in the Wild.

In 1910 one year, President Theodore Roosevelt said. “The Nation behaves well if it treats the natural resources as assets which it much turns over to the next generation increased and not impaired in value, and behaves badly if it leaves the land poorer to those who come after it. That is what I mean by the phrase, conservation of natural resources. Use them, but use them so that as far as possible, our children will be richer 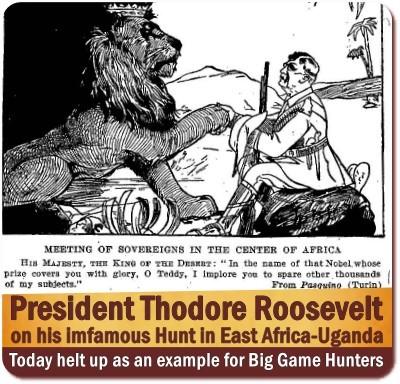 and not poorer because we have lived.”

Teddy Roosevelt on Safari – In 1909 during his last year of the Presidency, Theodore Roosevelt departed for Mombasa from where he with his son Kermit and other went traversed East Africa, including Uganda on a one-year killing spree of Africa’s Wildlife under the guise of collecting wildlife specimens for the Smithsonian Institute.

Various big game hunters assisted the father and son team. One of which was Frederick Selous, who was British and with a great reputation for killing big game, ironically Federick Selous became very concerned about conserving the Wildlife of Africa and bringing balance to the world of Nature in later life.

Taxidermists and zoologist accompanied the hunters – it has been said that President Roosevelt thoroughly enjoyed his hunting safari in Africa.  Not only did he enjoy his hunting Safari, he, in turn, but also inspired many others to follow his path, including Ernest Hemingway.

Theodore Roosevelt, “the Rough Rider of old” shot his way across East Africa along with his son and the hunting party led by Frederick 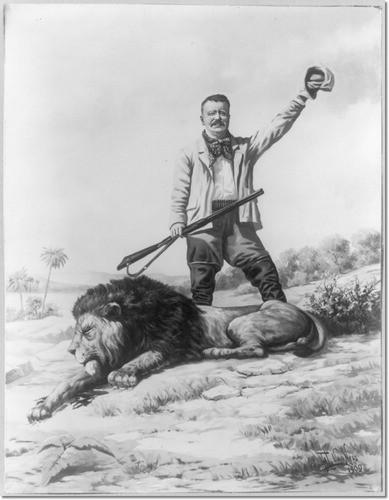 Selous, British with a great reputation for killing big game. At first, he was a world-wide known hunter, explorer, and military man. Like many of us, Selous later in life had a change of heart and developed severe concerns about the need to keep a sustainable balance in the world of Nature. It was said in 1909 – “the ex-president thoroughly enjoyed himself.”

While on Safari, the man described as “The most influential and representative American” was called “Bwana Mukabwa.” Meaning Great Master. The hundreds of porter involved this East African Hunting called Teddy Roosevelt – “Bwana Tumbo,” which in English translates Mr. Stomach.

Teddy Roosevelt certainly had a big stomach for Africa’s Wildlife, Big-Game, Birds, Reptiles, though considered a conservationist in America, in Africa this conservation philosophy was not apparent to the Wildlife that was along his route in East Africa.

During his 11 months on his hunting expedition, he shot and trapped 44,900 mammals, 4,000 birds, 2,000 reptiles, and 500 fish, in that number was nine elephants, eight black rhinos, five white rhinos, seven giraffes, six buffalo,12 topi, 10 Uganda kob, and a shoebill stork.  Here is what Teddy Roosevelt had to say regarding this hunt. “The most noteworthy collection of animals that has ever come out of Africa.”

He also defended his hunt against critics by saying, “I can be condemned only if the existence of the National Museum, the American Museum of Natural History and similar zoological institutions are to be condemned.” 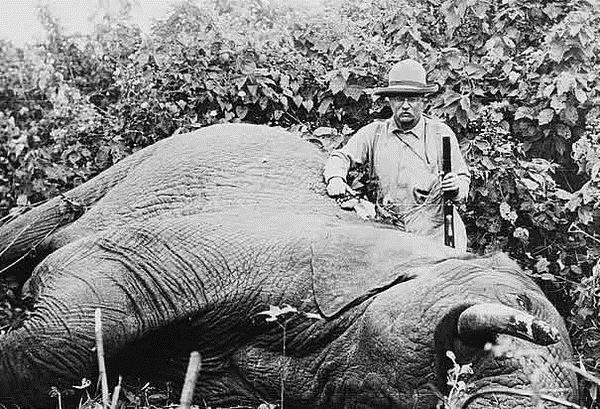 Today President Roosevelt and his son Kermit and the others would just be classified as poachers of endangered species.  Thank goodness most attitudes of Americans have changed since President Roosevelt hunting and gathering trips in East Africa, which included Uganda and even Murchison Falls National Park.

Some Safari Tour Companies, use his name, use him as a trailblazer across East Africa, we still see him as Bwana Tumbo – the man with a prominent stomach exploiting and pillaging the African Wilderness.

Here is an Amazing Statement made by President Theodore Roosevelt after his Hunting Safari in Africa: “The Nation behaves well if it treats the natural resources as assets which it much turns over to the next generation increased and not impaired in value, and behaves badly if it leaves the land poorer to those who come after it. That is what I mean by the phrase, conservation of natural resources. Use them, but use them so that as far as possible, our children will be richer and not poorer because we have lived.”

Theodore Roosevelt -Hunter – America’s First Conservationist President – a  Jekyll and Hide Figure – a Role Model for Sports Hunters in Africa – to Africans he is Bwana Tumbo – the man with a big Stomach and no regard for conserving African Wildlife.

Teddy Roosevelt on Safari – We will not create a safari for you in the Spirit of Teddy Roosevelt – but one where you can see the Wildlife, primates, birds reptiles found in Uganda.