Know the Mountain Gorillas of Uganda and Rwanda- Information and Background

Your Guide to the Mountain Gorillas of Uganda and Rwanda

Know Before You Go – Before you come to visit the Gentle Giants of the Forest.

Here we give you information and Background on Mountain Gorillas of Uganda, Rwanda, and the Democratic Republic of Congo. Today there are about 1,000 plus some Mountain Gorillas left in the world. Half of them live in Bwindi Impenetrable Forest and Mgahinga Gorilla Park in Uganda, East Africa. Mountain Gorillas are slowly increasing in Numbers due to Conservation Efforts, Community Education, fee-sharing, and Gorilla Tourism that funds it. 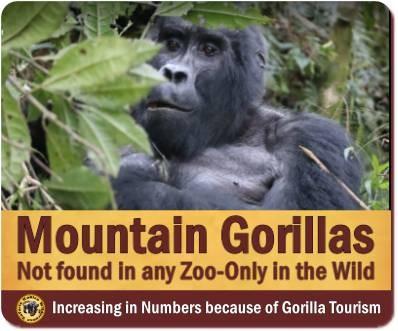 Mountain Gorillas of Uganda and Rwanda

Mountain Gorillas of Uganda and Rwanda – Information and Background. Say the word Gorilla, and you might see all kinds of images ranging from King Kong to some Tarzan movies. Mountain Gorillas were not even known about by Westerners until 1902. Rwanda was a German colony when Captain von Berenge was climbing Mount Sabyinyo on the Rwanda side with some friends, and they were at the 9300-foot level and camped when a group of Mountain Gorillas was spotted. He shot two of them but could only retrieve one. It was a young male about five years old, 220 pounds and not too large, but larger than any apes Captain von Berenge had seen. Bones and skin were sent to Berlin. There it was identified as a gorilla.

No one had thought that gorillas could exist in such elevations and colder climate. The news of these gorillas drew hunters, especially to the Congo, where they shot or captured them. Prince Wilhelm of Sweden shot 14 mountain gorillas in a 1920-1921 expedition to the area. 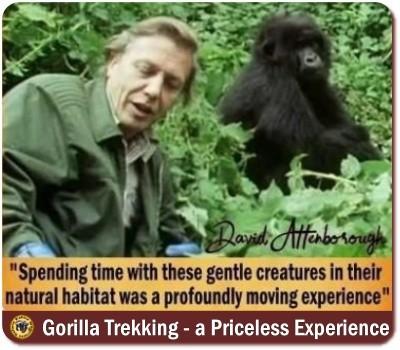 Most Gorillas that you might have encountered in a zoo are from the lowlands of the Congo and Western Africa. The mountain gorillas are a subspecies called Gorilla beringei beringei and only found in the wild in the Virunga areas of Rwanda in the Volcanoes Park of Rwanda, Virunga National Park in the Democratic Republic of Congo and Uganda in Bwindi Impenetrable Forest National Park and Mgahinga Gorilla National Park.

The parks are within 48 kilometers of each other. In Uganda and Rwanda. The parks are quickly and safely accessed, in the Democratic Republic of Congo, there are security issues at times, and most Countries have Travel Advisories. In contrast, travel insurance becomes void if you go there.

The Mountain Gorillas – Background and Information: There are 880 mountain gorillas in the world. Uganda has over ha hem found in Bwindi Impenetrable Forest, while others are at Mgahinga Gorilla Park.

The Gorillas are increasing in numbers due to the protection they are receiving from the Ugandan government Conservation efforts. 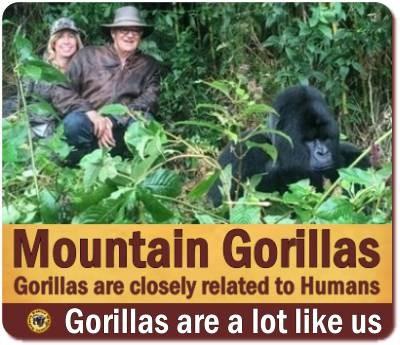 The Males are usually twice the size of females, and they can be 6 feet tall and weigh 350 to 500 pounds. They are strong, muscular, long arms. Males are called silverback since their hair on the back gets a silver touch to it as they mature. That is why they are called Silverbacks. Males are ten times stronger than the toughest boxer, even on steroids. A silverbacks arms will stretch out over seven feet

Mountain Gorillas have longer and darker hair than their lowland cousins since they live in colder climates at much higher altitudes. The lifespan is 40 to 50 years of age.

Mountain gorilla is mostly terrestrial but will climb into trees occasionally if the tree supports them, while young ones will play in trees like children.

An interesting factoid is that Gorillas and Humans are 98% genetically identical.

In Uganda, there are two places where Mountain Gorillas are found, one is Mgahinga Gorilla Park. A beautiful park

and a part of the Virunga chain of volcanoes that stretches into the Democratic Republic of Congo and Rwanda and Bwindi Impenetrable Forest National Park.

Bwindi Impenetrable Forest contains the largest Mountain Gorilla Population. It is an ancient forest that is also called “Place of Darkness.” The canopy of the trees making it dark within the forest. The altitudes of the forest are between 1,160 to 2,607 meters above sea level. Bwindi Impenetrable Forest and Mgahinga Gorilla Park each have different characteristics and similarities. Bwindi Forest is not an extinct or dormant volcanic area, while Mgahinga Gorilla Park is.

A Mountain Gorilla Day is from 6 am to 6 pm with a nap around lunchtime. Light comes in Uganda just past 6 pm, and darkness comes around 7 pm.

They move daily (a short distance) to a different location to spend the night making nests from twigs and leaves. Some human has found them quite comfortable, even enough to fall asleep.

Dian Fossey was against visiting mountain gorillas as it is done today in Uganda and, however, it is that money that keeps them from extinction since they are prospering and growing in number in recent years.

When mountain gorillas feel threatened, they will attack to protect their own. When groups of Mountain Gorillas meet, there can be a fight between the Silverbacks unto death or result in injuries.

The mountain gorillas live in groups that can vary in size from 2 to 30 to 40, but most often in groups of around 10. There is no mating season, and babies are born all year long. Males start breeding at about 15 years of age, and females give birth from 10 to 12 years old. Females will give birth every two to three years, providing 4 to 6 offspring during their lifespan.

Males leave their group at about 11 years of age, while a little over half of the females will go their group.

They communicate by sounds such as grunts, shouts, and roars, 25 sounds have been recognized by researchers. 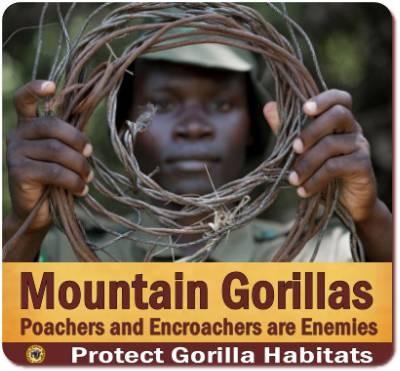 The greatest threat to Mountain Gorillas are Humans who may set a trap for antelopes, but a Mountain Gorilla gets entangled in it. The land is precious and is passed on to family members.d There is also encroachment by humans into the park. It comes in the form of farms, tea plantations, mining in preserved areas set apart for conservation

There had been a slash and burn mentality. It was hard to see how vast tracts of land should be left for Gorillas. It is through an educational process in both Rwanda – Uganda along with cash incentives to the community through tourism that the gorillas in Uganda are not as threatened by poachers as they might be in the Democratic Republic of Congo.

They are also threatened by diseases that humans may bring to the park, that is why strict rules are in place to prevent the spreading of disease from humans to Mountain Gorillas.

Leopards can kill an adult gorilla, and leopards are found in parks such as Bwindi Impenetrable Forest, Volcanoes National Park in Rwanda.

The Mountain Gorillas – Background and Information – it is one thing to read about them or see the pictures online, but nothing comes close to being in their presence.

Visit the Mountain Gorillas of Uganda and Rwanda – Get Started Today