The very Best Places to see Nile Crocodiles in Uganda

Nile Crocodiles – Incredible in Size and Numbers in Uganda 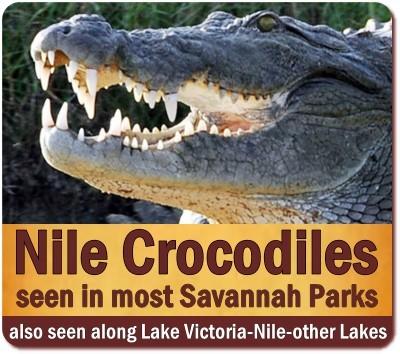 Living among Crocodiles is a reality for many Ugandans. Each year in Uganda, Crocodiles bring death and destruction to Villages. Each year man-eaters and other dangerous Crocodiles are captured by the Uganda Wildlife Authority and transferred to parks such as Murchison Falls Park.

On a good note, unlike in other parts of the world such as Australia, there are no recorded incidents of visitors to Uganda being harmed by reptiles.

The Best Places to see  Nile Crocodiles in Uganda 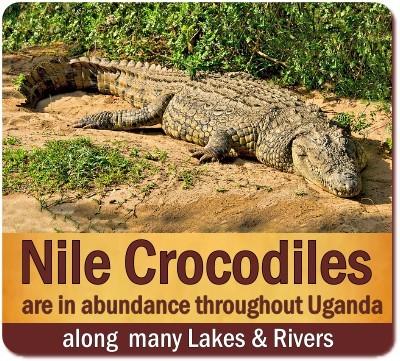 number and size of the Nile Crocodiles.  Their sheer size will impress you.

Murchison Falls has the highest concentration of Crocs in Africa.  Even Idi Amin used to come here to see these fierce predators, and you can find a film on YouTube where he is on a boat taunting these ancient creatures. (Pakuba Safari Lodge was Idi Amin’s favorite place)

There is even infamous man-eater crocodile on the banks of the River Nile that was relocated by Uganda Wildlife Authority.  Nile Crocodiles kill more humans than any other animal, a fact that has mainly to do with people living close to their habitat, and crocodiles can hide from humans and, in the matter of a second complete an attack.  You, however, are safe in a boat launch, just don’t tangle your toes in the water.

The ancient Egyptians worshiped a crocodile god named Sobek, who was sought out for fertility, protection, and the power of the Pharaoh – Crocodiles were kept as pets by some Egyptians. When they died, they were mummified and buried in a sacred tomb.  Even today, Nubian fishers mount stuffed crocodiles over the entrance of their home to ward off evil.

Unfortunately, in the rest of Africa, most people do not feel the same about crocodiles as the ancient Egyptians did. 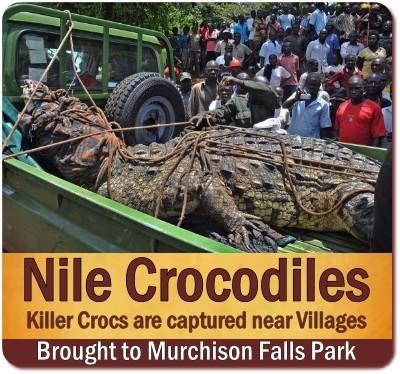 Today in Africa the number of crocodiles has dramatically declined, or even have been eradicated due to hunting for their leather – encroaching villages or simply killed because they were feared or hated.  Still, Nile crocodiles kill a number (about 200) of people each year. People who come to fish, fetch water at a lake, swim or wash clothes.  In Uganda, you hear or read reports of people being killed by Nile crocodiles around Lake Victoria and other Lakes, as in the case of the man-eating crocodile that has been banned to the Nile at Murchison Falls National Park.

As you take your boat ride on the River Nile up to the Falls, you will see a sizable number of them, especially on the sandbank near the falls – it is a fantastic sight – to you, they mean seem sluggish but do not be deceived. They can be swift even on land – but do not worry, they will not attack you if you are more than 3 meters away from them – yet they have a good memory and remember the paths taken wildlife and people.  They are most aggressive during the mating season, and there is something about when the temperature rises when it gets hotter that they are much more aggressive.

What is most impressive about the Nile Crocodiles at Murchison Falls National Park in Uganda is their size.  They can be up to 6 meters in length meters (20 feet) in length, and they can weigh over 700 plus kilos. The amazing thing is that they live between 80 to 100 years – outliving most humans. They feed on mostly fish but can easily take an antelope coming to water at the Nile and to bite this large prey, hold on and rapidly spin its body to weaken it in what is called the death roll and consume it. Crocodiles have the most potent biting force.

On the one hand, a Nile Crocodile can eat up to half its body weight at a feeding while on the other hand, they can 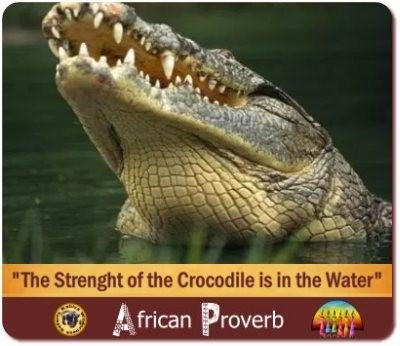 go for months without food – living off the fat stored in their tails. They do so by slowing down the body metabolisms.  They have the most potent biting force of any animal on earth, having strong muscles to close their jaws, but at the same time, they have weak muscles to open that jaw.

On a boat safari, you often see crocodiles partly submerged in the water. Most often, when they dive in search of prey, it will for a few minutes, but amazingly a Nile Crocodile can keep holding its breath for up to two-hours while if remains inactive.  Crocodiles have a four-chambered heart that is well equipped to keep the blood oxygenated.

The males are 30% smaller than the females – this larger body size allows the female to lay more eggs (up to 80).  The Nile crocodiles, unlike other crocodiles, do not use rotting vegetation where they place their eggs but bury them near water in holes about a half a meter deep (20 inches).  Amazingly both father and mother watch over the eggs, unlike other reptiles that leave them and even roll the eggs in their mouths to assist the hatching process – they also continue to protect them during the first two years of their lives.

A most impressive sight is the Spur-Winged Plover inside of the mouth of a gaping Nile Crocodile along the Nile.  It is not known whether this is part of a symbiotic relationship or merely an opportunity for bits of food, but you will see it most parks with Crocodiles.

There are 5 National Parks in Uganda that are the Best Spots to see Nile Crocodiles, which are Murchison Falls Park, Queen Elizabeth Park, Semliki Park, Lake Mburo Park, and the Pygmy Nile Crocodiles of Kidepo Valley Park. 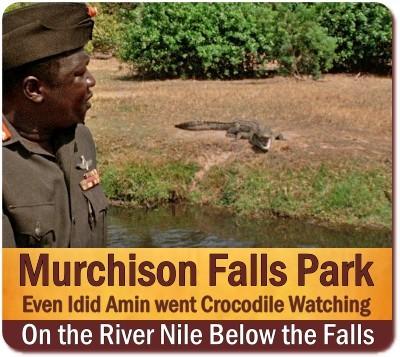 Murchison Falls is simply the best of the Best Places to see  Nile Crocodiles in Uganda and that you do here right on the Ancient River Nile that flows through the park.

Uganda, Murchison Falls Park has the highest concentration of Nile Crocodiles, including some man-eaters that in their past terrorized villagers in various spots in Uganda and are brought here by Uganda Wildlife Authority where they are released into the wild away from villages.

Not only is there a high concentration of Nile Crocodiles, it the size of the crocodiles themselves exceeding the size of Crocodiles found in other parks of Uganda.

Visitors to Uganda do not come for the Nile Crocodiles, but they are here, more significant than most expect, and the best spot to see them is Murchison Falls Park. 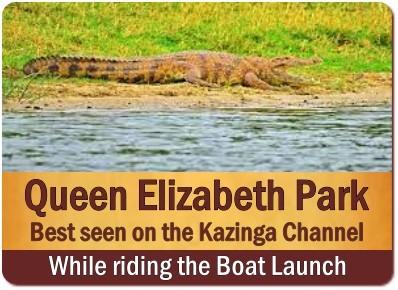 What most people do not realize is that Nile Crocodiles are a re-addition to the park.  For many years they did not exist in the park after a natural disaster wiped them out, but in the 1950s, they reemerged coming up from the Semliki River.

People were moving into the areas around the Semliki River and creating paths, removing obstacles made ways for the crocodiles hard to access  Lake Edward and Lake George along with the naturally connecting Kazinga Channel.

Today most visitors on a Kazinga Channel boat Safari see them but do not realize that they are relatively new to the area.

There are, at times, human-crocodile conflict incidents here in the Fishing Villages along the Channel – Tourists are safe since they are on well-protected boats. 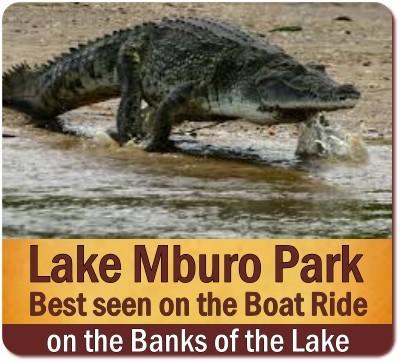 They are not as large as those that you might see on the Nile in Murchison Falls Park, yet they can be equally as dangerous to humans under the right conditions.

They are amazing creatures to spot on a boat safari.  They often have to be pointed out by a ranger or your driver-guide since they can be in stealth mode and appear like a wooden log semi-immersed in the water. 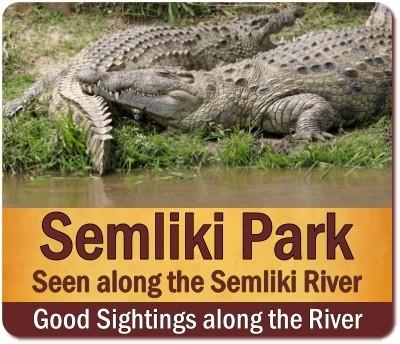 Crocodiles are found in the scenic Semliki Valley both in the wildlife reserve and in the National Park.

If hiking here along the Semliki River, one has to be aware that there are crocodiles along with hippos.  Crocodiles tend to hide on the banks of the river.

You are always with Rangers, and there are no reports of visitors being injured in a crocodile attack.

Uganda Wildlife Authority did remove a pesky crocodile from the area and relocated it a few years ago.

One giant Crocodile of enormous size was also found here, though, on average, the Crocodiles in Murchison Falls Park on the Nile River are the largest ones in Uganda. 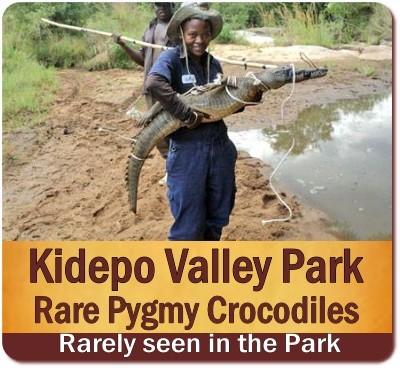 Kidepo Valley Park, one of the most remote parks in Africa, is home to the Pygmy Nile Crocodiles.

The Crocodiles of Kidepo Valley National Park are unusual for their small size, with a maximum length of 2.5 meters (Nile Crocodiles found elsewhere in Uganda regularly exceed 4 meters).

It is thought that this small size is due to the limited food availability and probably the small and shallow water bodies that are in Kidepo Valley Park during the long dry season.

Visitors do not often see the Pygmy Crocodiles, but they are there.  There is not a channel or river cruise here. It is on foot or in a vehicle.

In the dry season, these Crocodiles aestivate (like hibernating) to escape the heat in the remaining mud. Ongoing research into this unique Crocodile species continues to be made presently.

Best Places to see Nile Crocodiles – You just might see them elsewhere in Uganda, depending on where your safari takes you.  Places such as Lake Victoria, Lake Kyoga, which is a part of the Nile and elsewhere.  They are hearty animals and have survived for thousands of years. They are not the reason that visitors come to Uganda but are part of the landscape.

Visitors do not face dangers since they are most often guided.  Ugandans do, and Crocodiles attack villagers, fishermen, and others.  More Crocodile attacks happen each year in Africa than worldwide shark attacks, but the tragedies are unreported internationally for the most part.

If you are near lakes, rivers in Uganda the smart thing is to be croc wise – no swimming or splashing about in waters where Crocodiles are active – Look at them, observe them, take pictures but keep a distance. Common Sense – do not leave home without it.